The Centers for Disease Control and Prevention estimates that 9.3 percent of the population has diabetes, which is a three-fold increase in the last 30 years. Today, nearly 21 million American adults have been diagnosed with and suffer from diabetes, and more than 33 percent of our population lives with prediabetes. 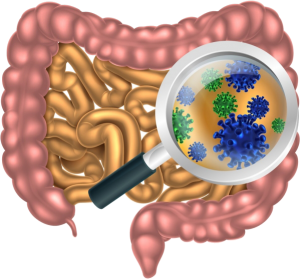 As an endocrinologist, I have been trying to understand the underlying causes of this increase in the United States and the rest of the world. I suspect few of us working in the field of endocrinology could have imagined that one day we might link the microbes in our gut to be possibly one of the causes of this increase. We carry almost six pounds of microbes in our gut, which form our gut microbiome. Each individual has a unique gut microbiome (also known as gut microbiota) based on a number of factors such as genetic background, diet, antibiotics exposure and age. Your gut microbiota is personalized like your signature. For example, some groups of microbes are inherited, and others are environmentally acquired. A group called Christensenellaceae is associated with a lean and healthy lifestyle and is very strongly inherited in families. This unique mix of bacteria is diverse and responsible for numerous functions. For instance, some of our gut bacteria protect against external bacteria and support our immune system. They also help regulate intestinal hormone secretion and synthesize vitamin K and several B-vitamins, including folate and vitamin B12. In recent years, new research suggests that in addition to genetic predisposition and lifestyle (physical inactivity/diet), microbes in our gut may play a role in the development of Type 2 diabetes. Some microbes form toxins that enter the gut and cause inflammation in the body, which affects liver and fat cells. As a result, insulin sensitivity and overall metabolism can be altered.Two main populations of microbes have been the focus of studies: the bacteroidetes that are thought to be important for protein and carbohydrate digestion in the gut, and the firmicutes that are involved in dietary fat processing. Researchers are finding stunning links between the changes in our gut flora mix in the last decades and the possible link with an increase in obesity and diabetes. Even though the relation between changes in the gut flora and the development of diabetes has not yet been proven, the suggestions are becoming strong enough to warrant more research. For instance, some studies now explore the benefits and protective effects of improving the gut flora in children who have Type 1 diabetes. Researchers are intensively working on understanding the relation of these microorganisms on cardiovascular disease and diabetes and possibly help change the gut flora to better mix with natural interventions such as healthier dietary options. A Cleveland Clinic study has been examining at the impact of bariatric surgery on diabetes. Researchers found that the gastric bypass procedure not only took off weight, but the ability of the pancreas to produce insulin increased five-fold. Researchers were surprised to find that a hormone change in the gut, caused by the bypass, triggers the pancreas to make insulin again. In addition to Type 2 diabetes, obesity and cardiovascular disease, other diseases such as inflammatory bowel disease and colon cancer, asthma and multiple sclerosis have been linked to changes seen in the gut flora. Diet is probably the single most important factor influencing the gut microbiota. Animal studies have demonstrated that changes in diet result in changes in the gut microbes, and human studies have confirmed these findings. A healthy diet with low-fat, high-fiber has been linked to a more diverse and better gut microbiota compared to a diet rich in fat and low in fiber. Research has also shown that human gut microbiota adapt and shift when exposed to a plant-based diet compared to an animal-based diet within a few days. It has been suggested that physical activity is also a significant influence on the gut microbiota. Smoking cessation also likely influences the gut microbiota. We’ll probably learn a lot more from future studies, and we’ll likely understand the underlying mechanisms and use this knowledge to find new ways to treat different diseases. But until then, eating healthy and exercising can help maintain and develop a healthy gut microbiome.